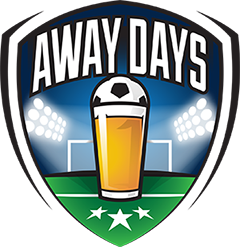 “One pint of Boncho barman…”

Away Days was launched in 2018 by beer and football fan, Josh Bartlett, with his sole aim of wanting to celebrate the beautiful game with beautiful beer.

Having watched his beloved Ipswich Town lose on a cold Tuesday night back in 2017, the idea of “football beers” was born after Josh saw some quirky named craft beers in his local and decided “Boncho” (the 90’s Bulgarian player, Boncho Genchev) would be a great name for a beer. The idea of ordering a pint of Boncho stuck and by 2018, with the help of Ipswich Town FC fans, Josh launched Away Days debut beers which included “Hoppy Robson”, “Golden Goal”, “Boncho”.

Four years on from that cold Tuesday night watching Ipswich lose and Away Days has gone from a part-time hobby business to Josh’s full-time venture, with the brand growing day on day and having been enjoyed by legends such as Alan Shearer, Chris Kamara, Peter Schmeichel & of course, Boncho himself (see article below), not to mention thousands of customers across the UK.